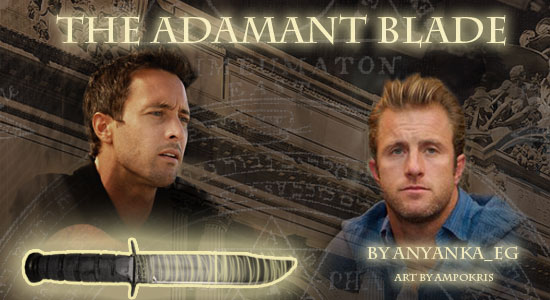 Title: The Adamant Blade
Pairing: Danny/Steve
Rating: R, I think, to be safe
Warnings: Mild demon gore, violence but not more than in the show, mental torture, ghosts, brief consensual possession, and some manly kissing

Summary: When Danny's sister Heather disappears, Steve drops everything and accompanies his partner back to New Jersey to help look for her, despite Danny's objections. How could Danny think he wouldn't? But there's more than Steve can ever guess to Danny's reluctance for him to help than just being difficult. Danny eventually shares the shocking information that his sister is a psychic PI, and that he can see ghosts.

Still reeling from Danny's revelations, Steve finds himself following Danny around a New York he never knew existed, one populated by magicians and voodoo priestesses, ghosts and demons. A world where Danny has all the skills and training, and Steve is barely even the backup.

Thanks: huge thanks to

ampokris for creating some effing amazing art for this, and for giving me great feedback. Also, thanks to my mum for betaing this for me. We have wildly different views about Oxford commas but she still did a sterling job on it.

Notes: The world I've written here borrows heavily from the Rivers of London series of books (stop reading this and go and read them now, they are way better than anything I have or will ever write) but isn't a crossover as I've only picked and chosen certain ideas from the world of those books.

Also, apologies for lack of Chin and Kono. I just couldn't make it work to have them going with Danny and Steve, and all the action happens around them

Link to story on LJ and on AO3
Link to